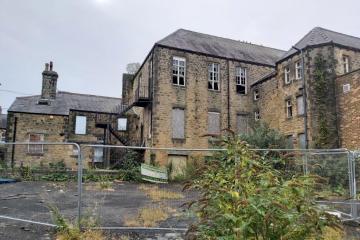 A BRADFORD property company has been fined £1,000 for leaving a large former Victorian boarding school it bought eight years ago in a dilapidated state.

Langley Properties (North) Ltd, which is based in Leeds Road, Shipley, was found guilty of being the occupier or owner of land when failing to comply with a notice to maintain it, last Tuesday.

Nobody from the company appeared at County Durham and Darlington Magistrates’ Court but it was proved guilty in its absence.

Durham County Council served a notice to the Bradford firm in September last year in response to concerns over the condition of the Stanley Board School site, off Front Street, in Stanley.

This notice had various actions that needed to be taken.

Court records show it included: securing and boarding or shuttering with wood or metal all the windows to the rear elevations of the property so they match those currently in use; making holes in the roof watertight and replacing missing slates with those of a similar colour and material to match the existing roof; and clear the former playground, to the rear of the building, of all weeds, rubble, building materials and rubbish.

But Langley Properties failed to adhere to these conditions.

The building was bought by John Lamb – a director of Langley Properties listed on Companies House – back in 2014 for £150,000, the Northern Echo reported.

Mr Lamb had plans back then to turn the former Victorian boarding school’s three buildings into apartments.

The site is situated on the main street in Stanley – just beyond its junction with Clifford Road – which houses a number of shops and businesses.

Stephen Reed, Durham County Council’s planning development manager, said: “Our Towns and Villages Strategy sets out that we will pursue enforcement where sites are allowed to fall into a state of disrepair and this prosecution is proof of our commitment to doing so.

“We know the vast majority of property owners do keep their sites in good condition but we hope the conviction and sentence imposed in this case serve as a warning of what can happen to the few that don’t.”

Langley Properties was ordered to pay £1,230 in total to the courts.

The Telegraph & Argus tried to get in touch with Langley Properties but could not find a contact number.