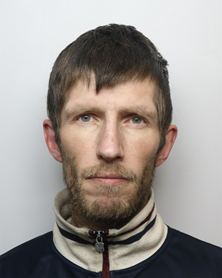 A BRADFORD man has been issued with a five-year Criminal Behaviour Order (CBO) after “persistent” begging – despite having a home and receiving benefits – West Yorkshire Police has said.

Robert Hill, who is 41, will not be allowed to beg anywhere in the Bradford district as part of the order, while it also prohibits him from entering certain areas.

The CBO was handed down to him after he appeared at Bradford Magistrates’ Court last week.

He was sentenced for a total of nine offences of begging, for which he also received a community order, including a 14-day curfew.

Hill’s offending has been monitored for over 18 months by the Bradford Anti-Social Behaviour Team and he was served with various interventions and warnings.

He received his final warning in February, and has been offered regular support throughout, police say.

West Yorkshire Police added that its officers and Bradford Council continue to work with support agencies and charities to divert those in genuine need away from street begging and get them the help they need, but, at the same time, they continue to receive large numbers of complaints about aggressive begging in the city centre and across the district as a whole.

It also says that he is not allowed to ask another person for money or goods in the City of Bradford Metropolitan District Council area, except as part of a contract of employment, a legitimate benefit claim, as a retail purchase or as a banking transaction.

The third and final condition of the CBO says Hill must not “sit, sleep or loiter in an area accessible to members of the public with any item or article which would give another person the impression that you are begging (such as a cup, hat, quilt or a sign) in the City of Bradford Metropolitan District Council area.”

If Hill were to break any of the conditions of the CBO, he would risk arrest and being sent to prison.

Sergeant Ceri Lloyd, of Bradford District Police, said: “CBOs are reserved only for the most serious of offenders and only when all other avenues have been explored.

“The Anti-Social Behaviour Unit works closely with partner agencies, to ensure that individuals are given every opportunity to address their issues and receive the support they need.

“Helping those in genuine need on the streets of the city by seeing they get the right kind of support remains a key focus of our partnership work carried out with the council and other third sector agencies.

“Unfortunately, there are those that refuse to engage and persist in aggressive begging behaviour that has a detrimental effort on the lives of other people and on the individuals themselves.

“We hope this order will give Robert Hill the incentive to engage and get the support he needs, and we encourage the public to assist us by reporting any breaches of the order if they do see him begging.”

A cannabis dealer who carried on selling the drug after being caught red-handed supplying almost £400 worth of it over a two-day period has been jailed for more than four years yesterday. Bradford Telegraph and Argus | News …

BRADFORD Council leader Susan Hinchcliffe has said the Government is “unflinching in their resolve” to put Bradford and West Yorkshire into Tier 3. Bradford Telegraph and Argus | News …

INVESTIGATIONS are under way following a stabbing incident on Sunbridge Road in Bradford last night. Bradford Telegraph and Argus | News …

A BRADFORD primary school is cutting the number of teachers it employs, as new pupil admissions are expected to drop by a third in the next few years. Bradford Telegraph and Argus | News …

A man who led the police on a blue light pursuit after he was spotted driving the wrong way down Bradford’s Shipley/Airedale Road has been spared an immediate jail sentence. Bradford Telegraph and Argus | News …