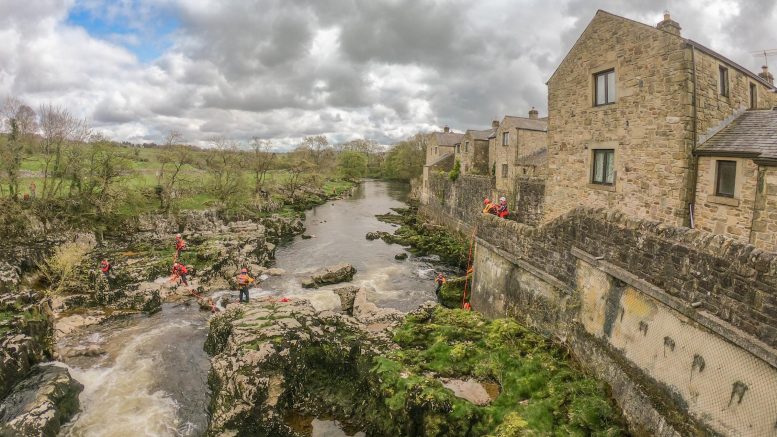 POLICE have confirmed that an 18-year-old man who died after getting into difficulty while swimming in a river on the UK’s hottest day of the year was from Bradford.

Emergency services were called to Linton Falls, on the River Wharfe, near Grassington, at around 7.44pm on Friday.

Rescue teams attempted to resuscitate the man but he was pronounced dead at the scene, the Upper Wharfedale Fell Rescue Association (UWFRA) said.

A spokesperson from North Yorkshire Police said they were contacted at 7.40pm on Friday with a report that an 18-year-old man from Bradford was in difficulty in the water at the beauty spot.

They said: “Members of the public were reported to be attempting to move the man to safety and providing lifesaving assistance.

“Officers arrived at the scene at 7.55pm and a local Police Community Support Officer provided CPR until Yorkshire Ambulance paramedics arrived shortly after. Despite the efforts of the emergency services at the scene, the man sadly died.

“A file has been prepared and passed to the Coroner.”

A spokesman for the UWFRA said: “The team were called to an 18-year-old male in difficulty whilst swimming in the River Wharfe at Linton Falls.

The team attended an incident at Linton Falls near Grassington. Partnership agencies requested assistance with a serious incident in the River Wharfe.

The thoughts of the team are with all those affected by this tragic event.

“The team co-ordinated the rescue with the fire service. CPR was administered by the rescue services but unfortunately the man was pronounced dead at the scene.

“Our thoughts are with all those affected by this incident.”

North Yorkshire Fire and Rescue Service said three crews, from Grassington, Skipton and Lofthouse, and a water rescue team from Ripon were called to a report of a man in the water.

Friday’s temperatures – which reached 37.8C (100F) at London’s Heathrow Airport at 2.41pm – made it the third hottest UK day on record.

And the Coastguard reported its busiest day for more than four years, as it dealt with more than 300 incidents.

Warnings were issued on social media about the dangers of water following the death of the teenager.

Martyn Hughes, a watch manager with North Yorkshire Fire and Rescue Service, tweeted: “Despite frantic efforts by many, we were unable to save the young man. Thoughts very much with family and friends. Sadly another water-related death at one of our natural beauty spots.”

And Grassington Fire Station wrote: “The falls and river at Grassington through to Linton and Burnsall is beautiful, it can be tempting on hot days to take a dip, but please beware of the hidden dangers in moving cold water.”

GALLERY: New images show how inside of former Odeon will be transformed into Bradford Live

BRADFORD City will show their colourful support to Lesbian, Gay, Bisexual and Transgender (LGBT+) inclusion in the sport. Bradford Telegraph and Argus | News …

PHILLIP BADWAL, who allegedly murdered his own father, Santokh ‘Charlie’ Singh, earlier this week has made his first appearance in court. Bradford Telegraph and Argus | News …

A FORMER manager at Bradford Council has admitted to several counts of fraud – including a charge that he had money intended for the Council paid into his personal bank account. Bradford Telegraph and Argus | News …