Looking for something to do in Bradford? Whether you're a local, new in town or just cruising through we've got loads of great tips and events to offer. Find out what’s on in Bradford with our regularly updated events calendar featuring the best upcoming events in Bradford and the area.

This guide lists events at a glance, showing what’s on each month. See the highlights of What’s On for Bradford, featuring the best of things to do in Bradford – Live Music and Gigs, Family Events, Art & Culture, Food & Drink and much more. Bradford fundraisers and charity events.

Important This Event Calendar is not maintained on a daily basis and some events may have changed dates or are no longer happening. Please double-check the event websites for the most up-to-date information. 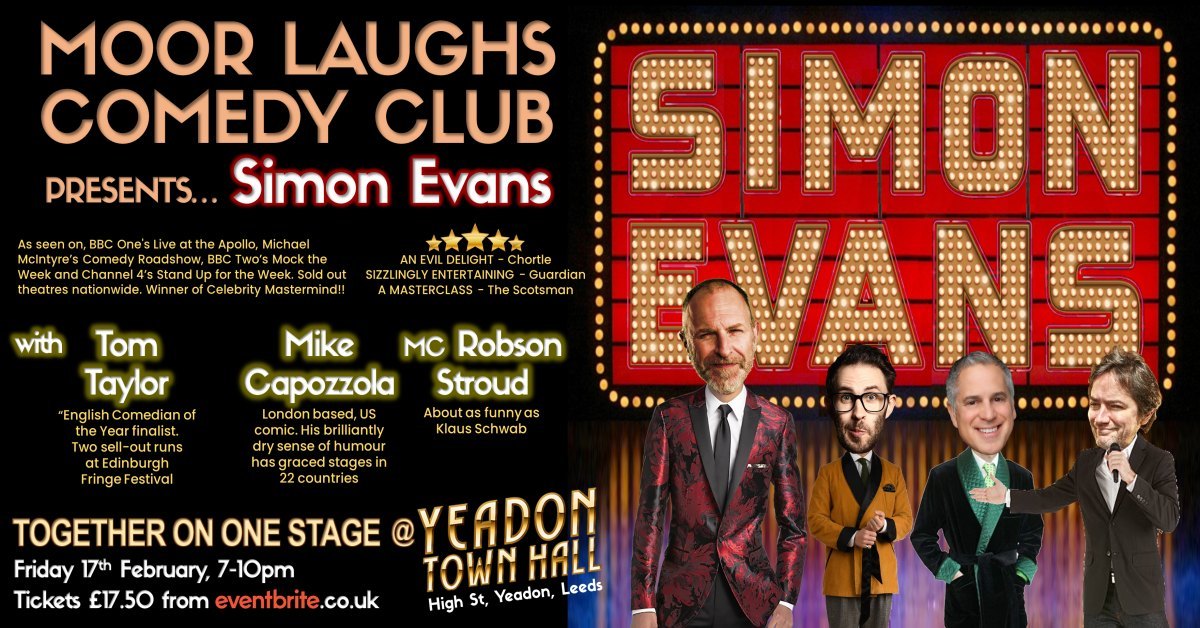 Moor Laughs at Yeadon Town Hall:- star of Live at the Apollo and others, Simon Evans with support from Tom Taylor and Mike Capozzola

SIMON EVANS
Simon is one of the UK’s most respected and talented comedians. A regular on TV and radio his TV credits include BBC One’s Live at the Apollo, Michael McIntyre’s Comedy Roadshow, BBC Two’s Mock the Week and was a regular on Channel 4’s Stand Up for the Week.
Simon has a BBC Radio 4 series Simon Evans Goes to Market and other radio appearances include The News Quiz, The Unbelievable Truth and Armando Iannucci’s Charm Offensive.
Simon is the only comedian to have appeared on both University Challenge: The Professionals, and Celebrity Mastermind (which he won – specialist subject Sir Ernest Shackleton).
His live tour shows such as Leashed and Genius have sold out theatres around the country and garnered superlative reviews from national and comedy press. Dominic Maxwell described him as ‘demonically dry’, William Cook as ‘sublime’, and Chortle as ‘an evil delight’.

Simon will be supported by:
TOM TAYLOR
Multi-award winning comedian Tom Taylor has received high praise from audiences and critics alike.
A favourite of live bookers across the UK, Tom has also supported John Bishop, Jason Manford and John Kearns on tour and performed on Radio 2 and Radio 4 as part of the BBC Radio New Comedy Award.
Tom’s debut Edinburgh show, Tom Taylor is the Indie Feel-Good Hit of the Summer, was one of The Telegraph’s must see shows of 2019 and was described by The Scotsman as “a genuine joy”.

Tom will be introduced by:
MIKE CAPOZZOLA:
Mike Capozzola is a London-based stand up comic / actor & presenter originally from NY.
Since the late 20th Century, Mike Capozzola ha performed in much of the USA as well as England, Scotland, Ireland, Holland, Switzerland, France…. a lot of countries.​
A copywriter pal described his act as ‘in-your-face-subtlety.’
“A brilliant comedian with a dry sense of humor.
We always enjoy having him at the festival”
-San Francisco SketchFest
“Hilarious… Twisted”
– Curb Your Enthusiasm’s Richard Lewis

SIMON, TOM and MIKE will be introduced by ‘master of ceremonies’ ROBSON STROUD who has managed comedy nights around England for 25 years and is mentored by cult comedy legend Charlie Chuck aka Reeves and Mortimer’s Uncle Peter.

Our venue is YEADON TOWN HALL:
First built in 1889, Yeadon Town Hall has been a local landmark and a key community building for the past 133 years. It has recently been renovated to its former glory and now has some of the best hospitality and show production facilities in the region.
The Yeadon Town Hall bar will be open before, at the intervals, and after the acts to purchase an impressive range of drinks and snacks.

If you have an event, that you would like to be featured on our Events Calendar, please visit Free Event Listing.