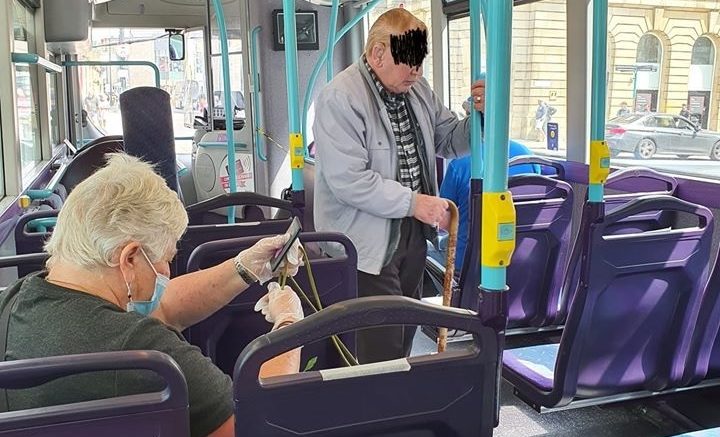 A DISABLED bus passenger has called the government’s public transport face covering rules a “paradox” while many others dismayed with their experience so far.

The Government introduced new legislation that meant from Monday, June 15, it is illegal to get on a bus or train without a face covering.

First Bradford drivers were left confused earlier in the week, after their bosses told them not to enforce the law and instead to advise and encourage.

Read more about that here…

But, the confusion and irritation is not isolated to just those who operate the buses.

With drivers unable to enforce the rules and a large list of exemptions, members of the public have seen plenty of people on buses without face coverings on.

William Oliver, 71, has severe sleep apnoea (he uses a machine at night so he doesn’t stop breathing) and mobility issues.

He uses the bus on average, once-a-week, and says he saw one bus on Monday which was full of people without face coverings on.

The 71-year-old’s is concerned about the message the Government’s new rules are sending out -saying one minute vulnerable people are being told to shield and the next they are exempt from wearing a face covering, if they do use public transport.

He added: “It is a weird paradox.

“The government are telling able bodied healthy people that they must cover their face or be fined.

“Those who are unhealthy appear to be expendable as they should be the ones taking safety procedures but the government haven’t made any directive to keep them safe.”

Mr Oliver has also challenged the “carte blanche” nature of the exemption for someone with disabilities.

He said: “Having one of these stickers doesn’t exempt someone, it is just advising or indicating why you are not wearing face covering.

“It doesn’t excuse you from being asked why you are not complying.

“While there are absolute exemptions, others are, if you are being honest, definitely not.

“If someone is travelling on public transport, it is for that person to prove they are exempt.

“Outwardly they may not look like they have a medical problem.

“If their exemption is therefore questioned, the person querying their non compliance is not wrong to do so.

“They know nothing about you and can only act on what they see. This sticker/notice is not proof.

“Having said that, it does give advanced warning to those responsible for your health and safety.

“This is where we now question your actual right to non-comply.”

The intricacies and nuances of the situation are not lost on Mr Oliver.

He sympathises with bus drivers.

Mr Oliver said: “Drivers have been told they can only advise someone they should cover their face, they have no legal power to force you to wear something.

“They certainly don’t have the time to look at peoples exemption certificates/doctors letters etc.

“They also don’t have the time or inclination to check throughout a journey whether an individual who was wearing face covering, is continuing to wear it.

“Thus the ruling, for travelling by bus, does not work.”

Meanwhile, the leading union for bus drivers – Unite the Union – has urged bus companies to “get a grip” and have separate staff members on board to order non-compliant passengers off the service.

Unite reiterated that it is not the responsibility of drivers to enforce the rules.

A Unite spokesperson said: Given the challenges and risks they have faced during the pandemic they already have enough on their plate.

“Unite has advised its members not to get involved with passengers who are not wearing a face covering.

This echoes the message that First Bradford sent out to its drivers, but the union feels companies need to do more.

The Unite spokesperson said: “Bus operators need to get a grip on this matter.

“They should be utilising other staff members to order passengers without face coverings to leave a bus.

“On routes where there is significant non-compliance the bus operator needs to ensure that the police are involved.

“It is vital that all passengers comply with the regulations in order to reduce the danger of transmission and to ensure that confidence returns to using public transport.”

A spokesperson for First Bradford said drivers are continuing to follow Government guidance by engaging, explaining and encouraging, but not enforcing.

Police will follow the same protocol, but instead will move to the fourth step of enforcing, if an individual does not comply.

The spokesperson for First Bradford said: “We’d like to thank our customers who are following the new rule on face coverings, which is helping our drivers and fellow passengers.

“We understand that it takes time to adjust and if someone isn’t wearing a face covering, the driver will remind them of the new rules.

“To help protect others, we are confident our customers will do the right thing and bring a face covering to wear on our buses.

“Vulnerable passengers who are exempt from wearing a face covering can download an Extra Help to Travel Card from our website and print this off to show to the driver or display on their phone as they board.

“We also have a new feature on our First Bus app which gives wheelchair users live updates that show if the wheelchair space is available on buses nearby and helps them plan their journey.”

A YOUNG father who stole a quad bike while on bail for stealing another quad bike earlier this year has been jailed for more than two years. Bradford Telegraph and Argus | News …

PLANS to turn a mill in the middle of a residential street into back-to-back houses will go before a planning committee this week. Bradford Telegraph and Argus | News …