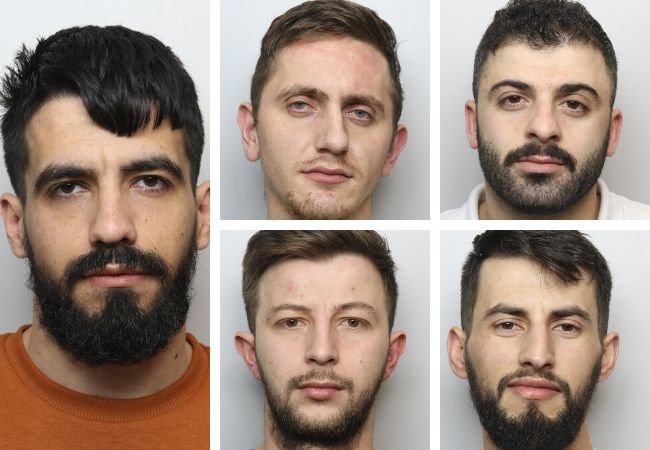 FIVE men have been jailed and warned they face deportation after the police bust a £160,000 cannabis factory on Bolton Road in Bradford.

The Albanian nationals, who were all arrested at the house, were sentenced at Bradford Crown Court today on a video link to Leeds Prison where they had been held since they were apprehended.

The men had earlier pleaded guilty to production of cannabis at 690 Bolton Road in Undercliffe on October 14 last year.

Xhulio Shuaipi, 23, and Alban Lushi, 26, both of no fixed address, were each imprisoned for two years.

Prosecutor Soheil Khan said the police broke into the house after complaints from nearby residents about a strong smell of cannabis.

They found 170 cannabis plants with a potential street value of £162,500 at the large mid-terraced property.

The front door had been sealed shut and walls had been lined with foil and plastic. The electricity meter was bypassed and the dining room window was plaster boarded over.

Mr Khan said the house was rented out in November 2018 using counterfeit documents, and £5,000 damage had been done when it was converted into a drugs factory.

The living room had a bed in it and a fridge containing fresh food.

The court heard that the only defendant legally in the country was Cajkri and he and Gjoka were in possession of counterfeit driving licences.

Lushi had gone missing after entering the UK illegally on a ship from Spain in 2016.

The immigration authorities had no record of Shuaipi or Gjoka, while Halil had been removed from the UK in 2017 and claimed asylum in France.

None of the defendants had any previous convictions, the court was told.

Ian Hudson, Shuaipi’s barrister, said he had been in Bradford for just a few days when he was arrested and expected to be paid £200 a month to care for the plants. He performed a limited function under direction.

Ken Green, for Halil, said he was also promised £200 to tend the plants, plus food and accommodation at the house. He was essentially a gardener at the factory. His father was terminally ill with cancer and he wanted to return to Albania before he passed away.

Shufqat Khan, for Gjoka, said he was brought to the UK in the back of a lorry and was working at the cannabis factory to repay a debt. They were not his drugs; he was receiving a small cash payment for looking after them.

Rodney Ferm, for Cajkri, said he came to Britain legitimately and had worked on construction sites in London. He was shopping for food and clothes for the people at the cannabis factory and tending to the plants. It had been set up months before, and there was no evidence that he was in Bradford at that time.

Katherine Robinson, for Lushi, asked for credit for his guilty plea. His fingerprints were not found at the address because he had just arrived at the house.

Judge Colin Burn told the men: “I have no difficulty in accepting that you were all recruited into this organised production of a Class B drug.”

But they were knowingly co-operating with one another as a group to produce a very large amount of cannabis. All of them knew the scale of the operation and were in it for financial gain.

Judge Burn said the men may be deported after they had served their sentences but that was not a matter for his court.

LATEST – Which Bradford areas have new Covid-19 cases and how many?

BRADFORD residents who have lost loved ones to Covid 19 are heading up a campaign to debunk myths surrounding the pandemic. Bradford Telegraph and Argus | News …

A WANTED paedophile was arrested at Leeds Bradford Airport on a flight from Amsterdam after file-sharing indecent images of young girls, a court heard. Bradford Telegraph and Argus | News …

A heavy spice and skunk cannabis user who drew an expandable baton in a Bradford street has been spared jail after returning to his religion while on remand in prison. Bradford Telegraph and Argus | News …

A LOCAL campaign group has called for a number of road schemes in Bradford to be scrapped. Bradford Telegraph and Argus | News …