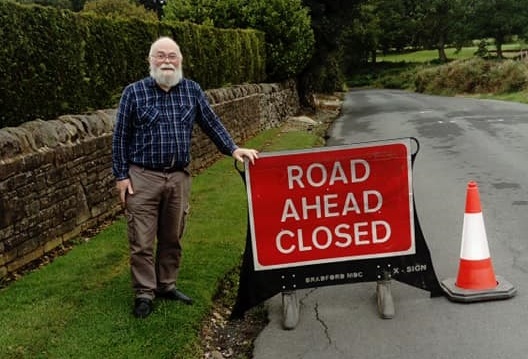 THE closure of a Heaton road, which has been shut to encourage walking and cycling during the pandemic, has met with mixed reactions in the community.

Shay Lane has closed this week because of an Experimental Order, which is part of Bradford Council’s response to the COVID-19 pandemic to support social distancing and create lower trafficked routes to encourage walking and cycling.

The closure, which will be in place for at least six months, has been welcomed by cyclists but not by all residents living in the Shay Lane area.

“How will the council know if this experiment will be a success?”

“I do know that this closure will extend my car journey into Bradford by several miles and 15 to 20 minutes.

“I estimate it will directly affect at least 55 people living in this part of Heaton.

Mr Murphy did say that the local residents do not like the traffic and that the narrow road can be difficult for pedestrians, but they have learned to be careful and watch out for dangerous drivers.

Dave Robison, chairman of the Bradford Cycling Campaign, said: “I’m sympathetic to those who live there, but the closure will benefit anybody who walks or cycles. It’s the kind of thing that we need to see more of. These Active Travel measures make it safer to do leisure activity.

“Shay Lane is a useful route for walkers and cyclists but you also get plenty of people racing cars down that road.

“It’s a good route to cycle but it can be quite nerve-wracking when cars whizz around the corner at speed.

“With the road closure in place, I’d now be happy cycling there with kids, and walkers and dog walkers should be happy too.

“This is a temporary measure that can be taken away, so I would encourage people to use it.”

A Bradford Council spokesman said: “The scheme forms part of the our Active Travel programme which is a national initiative to facilitate and encourage easier and safer walking and cycling in light of the current situation with Covid-19. Shay Lane has been recognised as a popular walking and cycling area that is often blighted by the volume and speed of through traffic. The closure was previously highlighted in the T&A and was the subject of a statutory legal process including press and site notices. This had to be done quickly as the emergency funding being used for this needs to be spent within a strict timescale.

“The order has been introduced on an experimental basis, with an initial period of six months during which members of the public may submit representations either supporting or objecting to the proposal (details at bradford.gov.uk). We have the option to retain the closure for up to 18 months but will of course give appropriate consideration to all valid representations received before making any decisions on how long to maintain it.”

Bradford homes without power – which areas have been affected?

A cannabis dealer who carried on selling the drug after being caught red-handed supplying almost £400 worth of it over a two-day period has been jailed for more than four years yesterday. Bradford Telegraph and Argus | News …

BRADFORD Council leader Susan Hinchcliffe has said the Government is “unflinching in their resolve” to put Bradford and West Yorkshire into Tier 3. Bradford Telegraph and Argus | News …

INVESTIGATIONS are under way following a stabbing incident on Sunbridge Road in Bradford last night. Bradford Telegraph and Argus | News …

A BRADFORD primary school is cutting the number of teachers it employs, as new pupil admissions are expected to drop by a third in the next few years. Bradford Telegraph and Argus | News …

A man who led the police on a blue light pursuit after he was spotted driving the wrong way down Bradford’s Shipley/Airedale Road has been spared an immediate jail sentence. Bradford Telegraph and Argus | News …