A teenager who crashed into a patrol car injuring two officers before leading the police on a high speed pursuit 11 months later has been locked up for eight months.

Oscar McAleese was uninsured, unlicensed and driving a silver VW Golf on false plates when he hit the West Yorkshire Police Peugeot 308 in Queensbury on the afternoon of September 19 last year.

FLASHBACK: How we reported the smash at the time

McAleese, 19, of Badgerstone Close, Keighley, wrote off the patrol car when he lost control of his vehicle in the Carter Lane area, Bradford Crown Court heard yesterday.

A female police constable who was the front seat passenger in the Peugeot sustained a broken right thumb, a laceration to her chin that left her with permanent scarring, and bruising to her hips.

Her thumb was in a splint for seven weeks and she can no longer comfortably hold a pen in her right hand, the court was told.

Her male colleague was concussed and suffered headaches, whiplash injuries and burning to his hand and arm from the air bag.

The officers, who were taken by ambulance to Bradford Royal Infirmary, had been left psychologically harmed.

McAleese fled the scene on foot but handed himself in at Trafalgar House Police Station in Bradford.

His female passenger stayed at the crash site and was able to identify him to investigating officers.

McAleese was released under investigation and had passed his driving test by the time of the police chase on Sunday, August 9.

He was at the wheel of a Seat Leon in Bingley at around 10pm when the police told him to stop because the vehicle had a cracked windscreen and no front number plate. McAleese accelerated away and led the officers on a ten minute pursuit that reached speeds of 100mph. He jumped a red light, narrowly missed a cyclist and stopped only when his tyres were deflated by a stinger device.

The pursuit, towards Crossflatts and Riddlesden and back to Bingley, ended in Haworth Road. McAleese ran from the car, leaving his three passengers, but was apprehended nearby.

Two days later, he pleaded guilty to dangerous driving on August 9, and to careless driving, driving uninsured and unlicensed, and a fraud offence relating to the false plates, all on September 19 last year.

McAleese’s barrister, Jessica Heggie, said he was of previous good character and only 18 at the time of both sets of offences.

He lacked maturity and had been diagnosed with ADHD.

McAleese had a loving and supportive family and had been working as a delivery driver before the dangerous driving offence. He had passed his driving test by then and was insured.

While under investigation, he had put the lives of more police officers, a cyclist and his passengers at risk during “a dreadful piece of driving.”

“It was a miracle that nobody was killed, including of course yourself,” Judge Rose said. McAleese was sent to a young offender institution for eight months and banned from driving for two years and four months. He must take an extended retest to regain his licence and Judge Rose made a deprivation order to take away both of his cars. 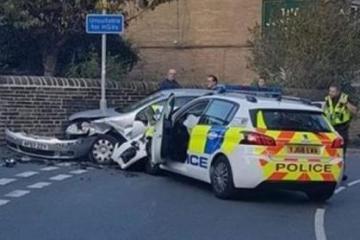 Bradford homes without power – which areas have been affected?