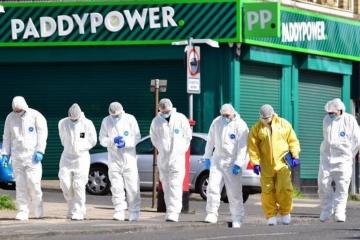 SIX men have been sentenced for their part in a street fight between two groups in Bradford which led to the death of one of their friends.

Jemima Stephenson, prosecuting, says there were tensions between two groups which led to the ‘widespread violence’ on the night.

CCTV footage of a number of the incidents of violence on Duckworth Lane were shown at the six men’s sentencing hearing, held at Bradford Crown Court on November 11.

A convoy of two VW Golf cars, featuring the men, was captured travelling to Duckworth Lane on the night.

Saif Shah arrived at the scene wearing a balaclava and carrying a weapon. He struck a man with a metal bar during the fighting. The man he attacked was punched and kicked and dragged out of a car.

Khan exchanged words with another man at the scene and was then involved in a two-minute-long fight before he got back into a car.

Mujahid Shah was seen with a tyre iron, swinging the weapon towards the opposing group. He also took part in the same attack on a man with his cousin, Saif Shah.

Meanwhile, Majid took a metal bar to the scene and swung it around at the beginning of the incident.

Another of the men in one of the two cars, Muhammed Mujahid Hussain, 19, a friend of theirs, suffered a single stab wound to his right, lower chest, where his heart was partly punctured, during the disorder in Duckworth Lane.

He was driven in a white VW Golf by Mahmood to Bradford Royal Infirmary (BRI) and was trying to make respiratory effort, but was pronounced dead at 12.50am on April 23, 2021.

Hashim Sajjad, 20, of Wheatlands Crescent, Daisy Hill, was found not guilty of his murder following a trial last December.

Shehzad, 25, of Nurser Lane, Bradford, was jailed for 21 months.

Khan, 21, of St Pauls Avenue, Bradford, was jailed for three months which he has already served on electronic curfew.

Majid, 19, of Hinchcliffe Street, Undercliffe, Bradford, was sentenced to eight months in a young offender institution.

Sentencing the group for the street attack, Judge Jonathan Gibson said: “You were all associated with the deceased.

“You all, in one way or another, engaged in violence that night. This was an incident that involved serious acts of violence.

“As a result of what happened that night, Muhammed Hussain lost his life.”

In mitigation, the court heard Saif Shah is a ‘very immature man’ who requires help to take responsibility for his actions on the night. Mahmood, who was not armed, and was a childhood friend of Hussain.

Mahmood’s mitigating counsel added: “He has suffered mental anguish on what happened that night. He did not leave his bedroom for a month after the incident as he was in a state of shock and disbelief.”

Khan’s mitigating counsel told the court that he ‘played no part in the wider violence’, who showed genuine remorse and showed a lack of maturity at the time.

The court was told Shehzad was ‘disgusted and ashamed with himself in getting involved in this’ and was devastated by Hussain’s death.

Mujahid Shah’s counsel said he was the driver of one of the white Golfs which took his best friend, Hussain, to Duckworth Lane that night.

Meanwhile, mitigation for Majid said he has suffered from flashbacks, sleepless nights and depression since the night of his friend Hussain’s death.